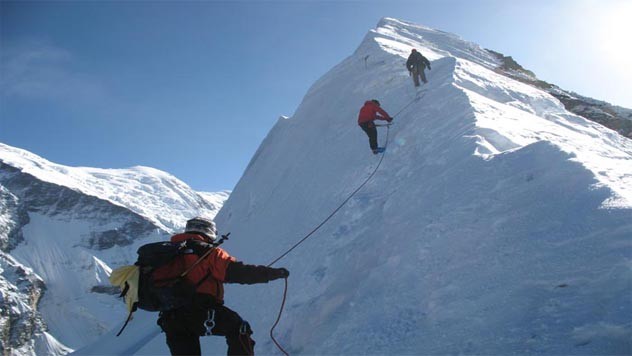 For many mountaineers worldwide, climbing the Himalayas is their dream. With more than 1300 peaks and the world’s highest mountains in its possession, Nepal can make those dreams come true. After the first ascent to Everest in 1953, the climbers of the world discovered the wonderful climbing opportunities in Nepal. The peaks we are discussing on this site are not Everest, Cho Oyu or Manaslu, but peaks with a little lower height and which are easier to climb. “Easier” might be an understatement, since some of these peaks still require serious climbing skills and amateurs should not attempt to climb these towers of nature. These peaks are often called “the trekking peaks of Nepal” by some of the western writers, but this would not give enough honor to the peaks. Most of the peaks are higher than those in Europe and Africa and some of them do require serious technical climbing skills which only professional mountaineers possess. For the first time climbers there are also enough peaks which can be concurred with a general good fitness and basic climbing skills. Peak climbing in Nepal is a combination of ascending the high peaks and climbing through wild and virgin alpine regions. Regular trekkers don’t walk on these trails and so this expedition will be a true bliss for you. As a member of the Nepal Mountaineering Association (NMA) we can provide you with the right permits to access these regions and mountains. At Api Himal we believe that the quality of your guide and the trekking/climbing arrangements will determine the success and enjoyment of your trip. We believe we have both in our possession, because we only use highly trained and skilled climbing guides (mostly Sherpas) with plenty of previous climbing experience. We also don’t shorten your acclimatization period so that we can maintain the schedule of the original itinerary. We also don’t shorten budget on the staff just to make the costs lower. We will give you the best trip you can imagine for the best price and without compromising any of the basics. Note that not all the peaks are open for climbing and out of the 33 peaks that are open, we have selected some of the most popular once on our site. If you would like to know more or inquire about other peaks, please contact us.

Mt. Tukche is a spectacular peak situated in front of Dhaulagiri 1 and the Annapurna range. Tukuche was first climbed…
Details Book
26 daysAdventerous trekking

The bulk of Mera, officially the highest of Nepal’s permitted trekking peaks, rise to the south of Everest and dominates…
Details Book
21 daysAdventerous trekking

This peak offers an enjoyable climb the peak, also provides some of the most striking scenery in the Khumbu. If…
Details Book
18 daysAdventerous trekking

Chulu Peak is situated to the north of the Annapurna range, and is an ideal summit for those wanting to…
Details Book
21 daysAdventerous trekking

Chulu Massif rises north of the Marshyangdi Khola in the Manang region and form part of the Manang Himal, which…
Details Book
20 daysAdventerous trekking

Chulu East (6,584 m.) is situated high above the Manang valley with breathtaking views across to the Annapurna II, III…
Details Book
22 daysAdventerous trekking