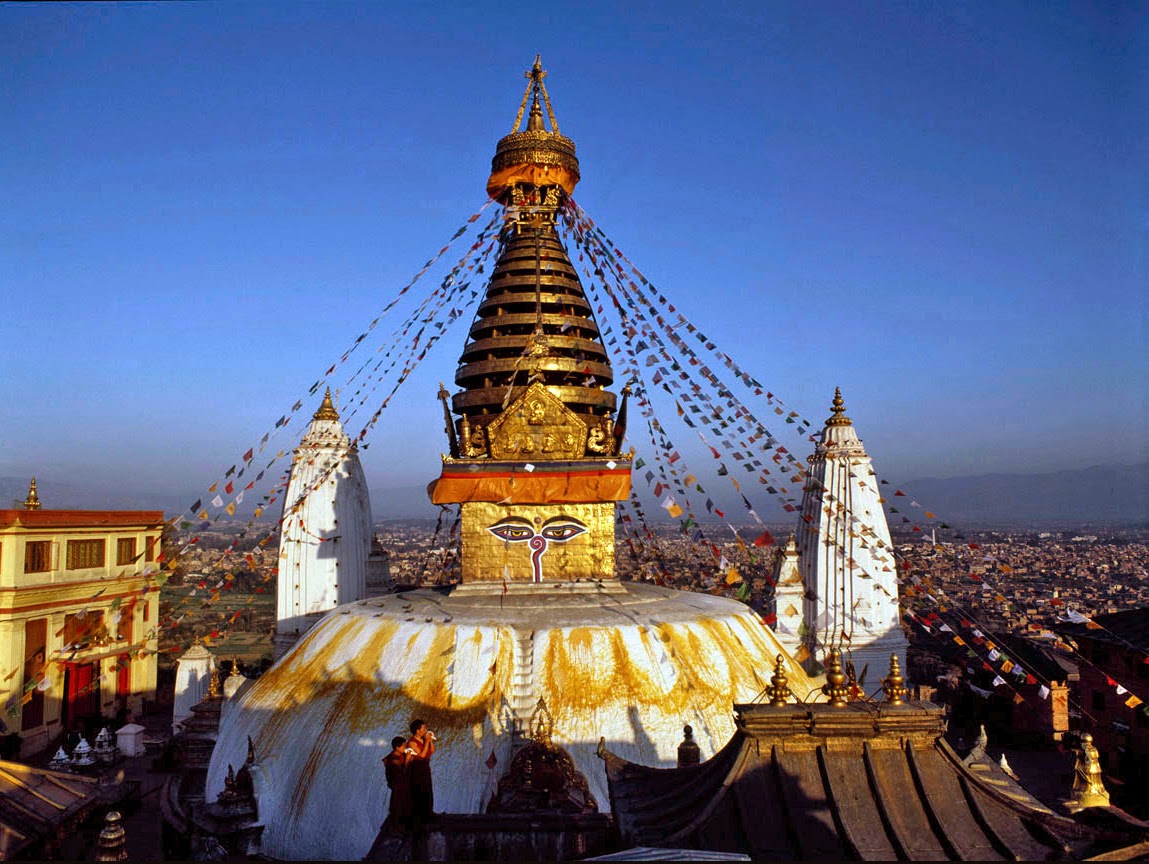 Nepal is a rich nation in terms of ethnicity and language. People from about 101 ethnic communities call Nepal their home in 90 different languages. Nepali Languages is the Official language of Nepal.

All the language spoken within the borders of Nepal are considered national Languages. The founder of the nation, king Prithivi Narayan Shah, declared the nation, as a common garden of people of various creeds. People like different culture of Brahmin, Chhetri, Newar, Rai, Limbu, Mager, Gurung, Sherpa, Chepang, Tamang, Thakali, Yakkha, Bhote, Sunuwar, Damai, Kami, Tharu, Darai, and multitude of other communities live in.

The Newar community, original inhabitants of the Kathmandu Valley, represents one of the uniquely diverse communities in the country. The diversity of castes and traditions of the Newer People, Especially in the Bhaktapur district, is amazing to even the citizens of Nepal.

Hanumandhoka is the oldest palace of Nepal Located in the Basantapur Durber Square, the palace was known as Gutapau palace before the 16th century. the palace was renamed Hanumandhoka, after the late King Pratap Malla set up a statue of Hanuman (the Monkey God) there. One can easily be fascinated by the sights of seemingly uncountable monuments at the square, The square constitutes the. Kumari Ghar (the house of the Living Goddess) and huge idols of Taleju, deguta Krishna, Hanuman (the Monkey God) and Kal Bhairab made at different tims . Out of the three important palaces of the Kathmandu Valley, Hanumandhoka palace is given priority. Considered important from different artistic and cultural.

Swoyambhunath Stupa:
Swoyambhunaht Stupa, stands on lovely little hillock located at a distance of 4 km from the Thamel. This religiously important site for Buddhists is also popular among Hindu devotees and people of the other faiths. This peaceful and calm hill commands the picturesque view of the Kathmandu Valley and splendid panorama of Himalayan range. Swotamdhunath is a popular tourist spot in kathmandu among Buddhists as well as the people from other faiths. There are hardly any tourist who doesn’t visit the swoyambhunath temple. The Stupa is laden with 13 gold plated spires symbolizing 13 stages to salvation in Buddhha. Different sorts of idols of Buddha has added to the attraction of the Stupa.

Pashupatinath Temple Bhaktapur.is revered as one of the most important pilgrimage sites for Hindu devotees all around the world. The temple lies in Gaushala of Kathmandu. According to the Hindu religion.

Pashupatinath is considered as the protector of the universe and the patron deity of Nepali people.Hundreds of thousands of Hindu devotees from across the world come to Nepal to visit the temple.

While Nepali and Hindu devotees desire to visit the temple for the religious purpose, foreign tourists get attracted toward smal temples and the sculpture of various gods and goddesses within the shrine.

Bouddhanatrh Stupa.
Located at a distance of 8 km from the Kathmandu city Bouddhanath stupa is one of the important pilgrims for Buddhist. The stupa is surrounded by one hundred and eight small niches.

Accommodating the icons of Buddhas, Bodhisatavas and other fmale deites. The serene environment in the surroundings of the stupa has added to its attraction. It is a preferred destination for tourists, especially Buddhists from all over the world. Mainly, followers of Buddhism from Tibet, China, Sri Lanka, Korea and Japan desire to visit this sacred place is also popular among the followers of Hinduism as well as other religions. Every year, thousands of people visit the stupa that epitomizes. Tibetan Buddhism. Listed in the UNESCO’s world heritage site, the huge sized stupa is one of the prime sites for tourists and pilgrims

Patan Durbar Square is the main attraction of the Laitpur district. Known as Yala among Newari Language Speakers. the city is also called the city of wooden crafts and handicrafts. The palace has earned distinction being the home of finest crafts. Ancient shrines, museum, Krishna temple, Suvarnadwar, Devasthal, and various small and big temples scattered in and around the square are some of the attraction. The area has been made attractive with the presence of various artistic masterpieces, and ancient temples. The square offers myriad opportunities for visitors willing to study and research artistic and architectural masterpieces, history and culture of Lalitpur & Bhaktapur.

Popular for its religious, cultural and historical heritage Bhaktapur is also known as Bhadgun. This city rich in ancient arts, sculptures, is also known as an open museum. moreover, the city is also famous as a city of gods. Bhaktapur has a cluster of temples pagodas, monuments, courtyards, squares traditional houses, artistic stones taps also Buddhist shrines and monasteries built in different times of the history. The existing civilization characterized with Newari life style, and their fabulous traditions and rituals reflected in the day.

Day 5 : Drive To Nagarkot and Over Night

The Nagarkot View Tower is a magnet for nature lovers who reach there to capture the scenes of rising sun in the morning and when it is setting in the evening. Be it the majestic view of the rows of Snowcapped mountains or the bird eye view of the kathmandu valley seen from the View Tower located at the highest point of Nagarkot, View for sun set and sun rire.

Day 6 : Drive Back to katmandu and Stay in Hotel
Day 7 : Drive to Chitwan National Park.

Chitwan National park spreads over an area of 932 sq km is known for its sal and revering forests and grasslands. The park hosts 570 species of flowering plants, 40 species of mammals, 486 bird species, 17 reptiles and 86 fish species.

Buddhism is practiced by over 400 Million People in the world, who follow the teachings (Dharma) of Buddha this holy and archeologically/historically reach place is complemented by a civilization created over 2,500 Years ago.Lumbini received World Heritage status in 1997. Limbini. can be reached bo a 30 minute flight or a day-long from Kathmandu It is situated 306 km southwest of Kathmandu. the Lumbini Area is situated in a rural landscape at the foothills of the Himalayan where the kingdom of the Sakyas once flourished some 2,500 years ago. The royal garden where Prince Siddhartha was bron in 623 BC to Queen Mayadevi and King Suddhodana is in Lumbini Emperor. Ashoka of India visited Lumbini in the 3rd Centure BC when the place had already become a buddhist center.

Palpa is a hilly district in Lumbini Zone of the western region. The naturally beautiful and historically important. Palpa has emerged as an important destination for domestic and foreign tourists. Most of the tourists arriving here compare the climate and terrain to Indian hill station of Darjeeling while others call it the queen of hills or younger brother of Kathmandu. Palpa is called the younger brother of Kathmandu because of the similarly named place, temple, squares and traditional culture. The Magar and Newar community are dominant in Palpa thus it is possible to closely observe their traditional culture in palpa.

Pohkara is also an important religion centre. People from different faiths live close by amicable in Pohkara. There are holy site of all the major religions Temples, monastaries, Stupas, mosques and churches have added to the Pohkara’s beauty. the holy site have become the centre of attraction for followers of one religion alone but all alike, setting an example of religious tolerance.

Daman the Main tourist spot of Makawanpur district, is located on a lofty hilltop and is 75 km from kalanki or 56 km from Hetauda by road. The hill station situated at an altitude of 2322 m is famous among nature lovers.

The hill station provides a better view of the Himalayan ranges sunrise and sunset. The panorama of Mountain ranges extending from Mt. Dhaulagiri in the west and Mt Everest in the East. A hilltop view tower has also been constructed here.